Welcome to The Historic Pig and Whistle Inn!

Established in 1832, this Heritage Site houses the oldest continuously operating pub in South Africa.  The Inn offers its famous veranda and historic restaurant for casual eating and 10 traditionally furnished rooms for complete relaxation in the quaint village of Bathurst.

An exploration of South Africa would not be complete without a drink at the oldest continuously licensed pub in the country. The pub is a favourite among locals thanks to its warm, companionable atmosphere, and the fascinating history makes it a popular watering hole for holiday-makers to the Eastern Cape.

The wooden beams, wood-burning fireplace and air force memorabilia decorating the stone walls are a reminder of the colourful story of the pub's considerable lifetime. In the present day, the air conditioning keeps the summer heat out as effectively as the old fireplace has always kept the winter chill at bay, making The Historic Pig and Whistle Inn a year-round sanctuary.

The pub is also equipped with satellite TV so that sports fans can keep up to date with important games in between their exploring and holiday-making.

A recent addition to the pub is the Frontier Bonsmara Whisky Bar, which serves premium whiskies and other spirits. The whisky bar is open at weekends.

In keeping with the Inn's English heritage, the restaurant serves traditional Sunday roasts and classical pub food, alongside vegetarian meals and Mediterranean favourites for the modern palate. The menu also features other signature dishes, such as the renowned pot pies, and freshly baked cakes and desserts.

Guests can enjoy their food whatever the weather. The dining room is pleasant come rain or shine, and the veranda is a lovely place to enjoy a meal in the balmy Bathurst summers. The pub, with its friendly patrons and bar staff (not to mention wood-burning fire) is also an amiable and comfortable place to enjoy a hearty meal. There is also an enclosed outdoor area for children to play in.

The Historic Pig and Whistle Inn makes a unique venue for any sort of function, from weddings to business conferences.

Driven to desperation by poverty in 1820s England, people of the lowest classes chose to brave three months (or more) journey by ship to a fledgling colony on the shores of an unknown land. The village of Bathurst is what is known as a frontier town, established by these 1820 settlers on the edge of the newly founded Cape Colony as they tried to find a place to eke out a living in the completely foreign territory of the Eastern Cape.

The Historic Pig and Whistle Inn was built by one such settler. Thomas Hartley settled in Cumber in 1820 and put down roots in Bathurst, where he built a forge and a house in the early 1820s. By 1832, he had also opened an inn, which he built next to his forge.

Bathurst was well situated geographically as a waypoint for wagon travellers. There was a smithy, farrier, shops and, of course, the inn, then known as the Bathurst Inn. In 1832 surgeon Ambrose Campbell began to travel to Bathurst from Grahamstown on the first Saturday of every month for consultations.

The inn was highly regarded and, despite neighbouring a forge, the inn's rooms were billed as "Subscription Rooms for Gentlemen". High profile guests included Lord Charles Somerset, the Governor of the Cape, and Sir Benjamin D'Urban.

Following Thomas Hartley's death in 1840, his widow, Sarah, took over the inn. Her gift for hospitality allowed the inn to flourish, and it became the accommodation of choice for travelling dignitaries and government officials.

In 1847 the Governor General of the Cape Colony, Sir Henry Pottinger, stayed at the Inn where he was visited by the Chaplain, the Magistrate and the Post Commander. The following year the next Governor General, Sir Harry Smith, also stayed at Widow Hartley's Inn (as it was then known).

In 1849, the inn was painted in oils by famous English explorer and artist Thomas Baines. Sarah Hartley died later that year, leaving the inn she had made renowned in the colony to her son, Thomas Hartley Junior. In 1852 Jeremiah Goldswain bought the inn from Hartley Junior.

The inn acquired its current name about 100 years later, when soldiers from the Royal Air Force were stationed nearby. They decided to name their new pub after their local pub in England, thus the Bathurst Inn became the Pig and Whistle. 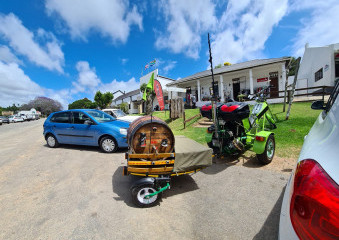