Offering a chic yet traditional way of experiencing exquisite cuisine

Parc Ferme is situated in the hub of Sandton and offers a chic, yet traditional way of experiencing exquisite cuisine prepared by our Mauritian Executive Chef Atmaram Mahadea.  With its contrasting décor brushed with shades of grey, black and white along with hand selected fabrics and textures, Parc Ferme creates an atmosphere of relaxation and luxury. The team at Parc Fermé take care to provide outstanding service as well as the best ingredients using quality fresh produce and top class cuts of meat, ensuring that their diners enjoy a memorable dining experience.

Parc Ferme invites you bask in this atmosphere of warm hospitality, luxurious decor and beautiful people. Parc Ferme go to every effort to make sure diners feel like the crème de la crème of society after they have been served the finest meal in Sandton.

Experience the succulent flavours of our meat and poultry dishes; fillet, T-bone and oxtail being favourites or enjoy a lighter meal such as our whole baby fish or delicious tempura prawns. Wind down with a mouth-watering cocktail and our famous Crème Brûlée as you enjoy the sunset amidst the metropolitan towers. Whatever you are craving our Chef will make it for you. Superb wine selections, outstanding dishes and excellent service – YOU NEED to experience it for yourself. 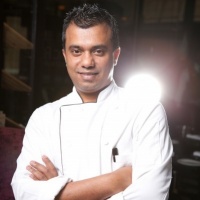 Newly appointed head chef, Mauritian born Atmaram Mahadea is the talent behind Parc Ferme. His flamboyant style mixed with a solid foundation of traditional cooking techniques will appeal to even the most discerning diner. Atmaram is responsible for the menu creation, management of kitchen staff, and plating design.

A glance at the signature dishes being promoted clearly illustrates the blending of his creole styled and Mauritian influenced food with trendy new fusion ideas using fresh ingredients to good effect.
Atmaram explains that is style of cooking is very different in that he attempts to bring together a host of flavours from a variety of destinations. Combined with his experience in the kitchen and the many places he has worked at, he passionately believes that Parc Ferme is creating something quite distinct in the Sandton area.

Atmaram’s experience includes a tenure as head chef at Pearl Valley Golf Estate, prior to which he was the sous chef of the same establishment, sous chef of The Grand Mauritian Hotel and Spa, first cook for Princess Cruise Lines and sous chef for Golden Valley Casino.

Atmaram has introduced his style of combining French and Mauritian flair to the Parc Fermé breakfast, lunch and dinner menus. He has also introduced sushi, light lunches, snacks and tea and coffee options for visitors looking to take time out over a meeting or wanting to grab a quick bite before negotiating their way through busy Sandton.

His tantalising specials and a preview of menu items may be visited on www.parcferme.co.za Parc Fermé’s new chef brings a revolutionary taste extravaganza to its menu

Our Must Try Meals!