A Jewel on the North Coast

The Fig Tree Restaurant is located between Ballito and Salt Rock on the beautiful Simbithi Eco-Estate.

Named after the fig tree that once stood in the centre of the clubhouse, the restaurant boasts stunning views of the acclaimed Simbithi golf course, designed by Peter Matkovich. The large deck, situated under shady trees offers "al fresco" dining, while the Drop Zone Bar just across provides a stellar spot for drinks after a few rounds of golf. The John Platter Wine Gallery offers a perfect venue for private, intimate dinner parties. The wine list is selected by local resident John Platter.

The restaurant offers live music on selected evenings and the Curry Buffets - on Wednesdays - and Sunday Carveries are extremely popular with both locals and visitors to the area. There is also a fantastic kids play park area where the kids can enjoy themselves whilst guests relax, lap up the view and enjoy a meal in the restaurant.

16 February 2020 - He is undoubtedly one of the most talented chefs in KwaZulu-Natal and we are very lucky to have snagged him for the month of February. Chef Constantijn, better known as ‘Tijn’, will be ... 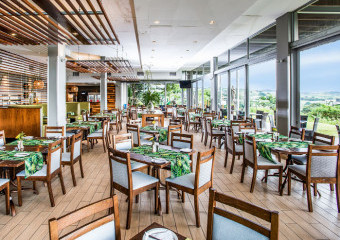 Specials at this Restaurant